Znamenny Chants (chants containing Znamenny melody) — a basic form, the oldest and the primordial form of Russian liturgical singing. To record the chants used special characters — Znamya, which are also sometimes called Kryuki. This notation differs from the usual us linear one in that it haven’t clear correspondence between the Znamya and the height and duration of sound. Therefore, the translation of hymns from the Znamenny notation in linear is not a trivial task. Difficulties associated with decryption of the znamenny chants is that domestic laws of znamenny notation not clear. The figure shows an example of Znamenny chants: 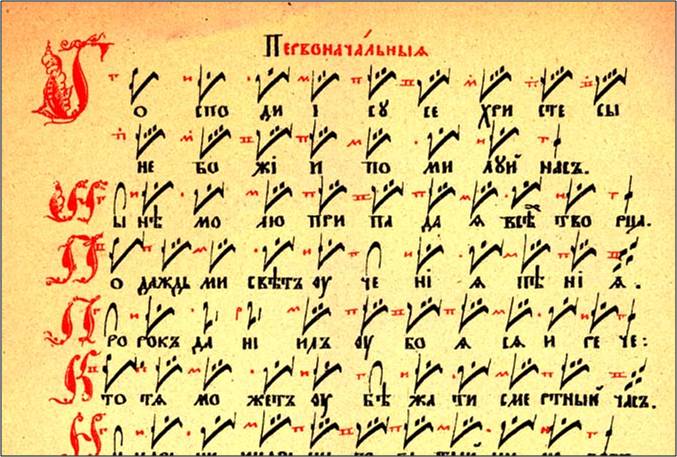 We carry out research during which were found other projects dealing with these subject. It turned out that there is a «Фонд знаменных песнопений » which entry Chants in the Znamenny and the linear notation. This project was started in 2003, by now they have managed to entry more than 10 thousand chants. The developers of the project was decided to divide each book into chants, and provide for viewing the selected user. This approach does not allow to see the book as a whole (moving from one page to another). Also, the chant is rendered without linking it to the source, because not retained its original style, as all songs are typed with single universal type.
In addition to Internet publications, are published printed books, collections of hymns in the Znamenny notation, but they represent only a few books-originals.
Primary sources, which number more than 200 books (it’s singing books Октоих, Обиход, Триодь, Праздники (Oktoih, Obihod, Triodʹ, Prazdniki) and collections, containing between two and more vocal books) are stored in the library, but access is restricted and is possible only after special permission. Photocopy manuscript is also done after the permission and and not in its entirety. Thus, we can see how looks znamenny chanting, find any information on this subject, but to gain access to any particular source of most people is almost impossible.
On the other hand, a problem not only in browsing. The more important task is to study the manuscripts. Work with a picture or highly fragmented book is inconvenient because it is difficult to find information. For example, the implementation of statistical analysis requires more time and labor costs, since this work is quite monotonous and requires concentration. Using computer facilitates this task as many times.
Thus, it is necessary to prepare the electronic edition, which lets you view Znamenny book in the form in which they were written and carry out research of the chants.